Clive Fenner's R & B All Stars 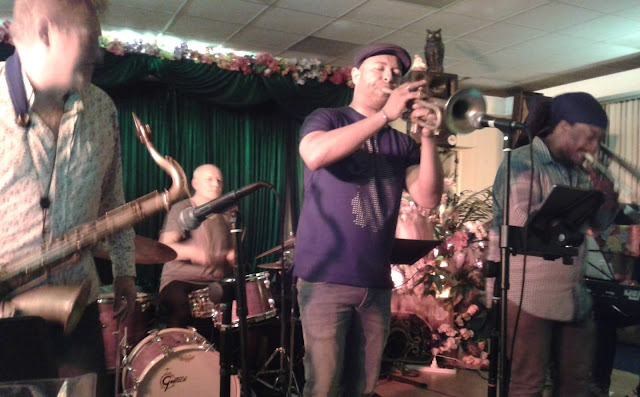 Derek Nash very generously suggested tonight's gig should have a name change to recognise the tremendous enthusiasm Clive always gave this annual gig and indeed the joy he got from playing it. All Stars they really are, with several members of Jools Holland's famed Rhythm & Blues Orchestra plus guitarist Dave Ital (Maceo Parker, James Brown & Incognito), Pete Whittaker, a leading exponent of the Hammond organ, Geoff Gascoyne (Jamie Cullum) the go-to bass player plus top session drummer and Dave Gilmour accompanist Nic France.
Derek Nash is a vibrant and charismatic performer on all four saxes from soprano to baritone. Derek is of course best known as leader and arranger, since its inception over 30 years ago, of the award winning ensemble 'Sax Appeal'. His playing credits include David Sanborn, Mavis Staples, Eric Clapton, Tom Jones, Jools Holland and the late Spike Robinson with whom he recorded an award winning CD 'Young Lions Old Tigers'. Derek is also a respected recording engineer. He was awarded a gold disc for his work on 'Pointless Nostalgic' by Jamie Cullum and has recorded for Bobby Wellins, Dave O'Higgins, Martin Drew, Geoff Gascoyne, Georgie Fame and George Melly.