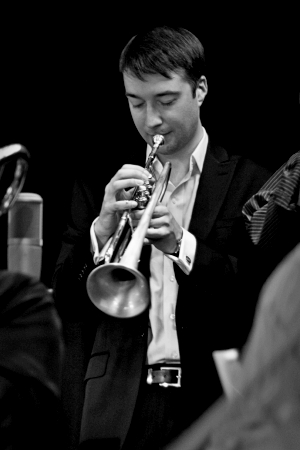 Steve Fishwick is already a firm favourite here with his stylish and perfectly executed take on the classic hard bop sound. By the time Steve and his twin brother, drummer, Matt enrolled at the Royal Academy of Music in London at the age of eighteen, they had led their own group and were familiar faces on the Manchester jazz scene. He co-leads a sextet alongside saxophonists Osian Roberts and Frank Basile. Their most recent album 'In The Empire State' being recorded in New York. "Throughout the proceedings Steve Fishwick proves himself to be a world-class player.." - Brian Robinson, Jazz Journal. On the more commercial side he has performed with such stars as Kylie Minogue, Jools Holland and Jamie Cullum and can be heard playing the jazz trumpet solos on the soundtrack to the British movie release 'Sex and Drugs and Rock and Roll'. Tonight, Steve is joined out front by reeds player James Allsop, making his East Side debut and returning in two weeks.