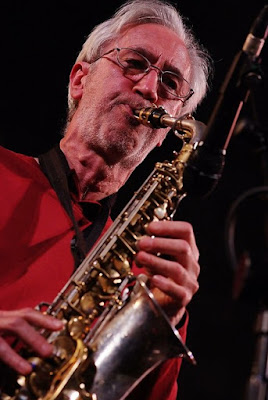 Chris Biscoe is self taught, starting on alto sax then tenor, soprano, baritone, flute and alto clarinet. He started working with Mike Westbrook in 1979 and has played in many of Mike’s projects. He has also toured and recorded with George Russell, Andy Sheppard, Grand Union, Chris McGregor, Didier Levallet and worked with Hermeto Pascoal, Dewey Redman, Kenny Wheeler and the New York Composers Orchestra. A recent venture for Chris (on baritone & alto clarinet) along with Allison Neale on alto has been a new band 'Two of a Mind'. The band’s debut album on Trio Records, includes some tracks using arrangements from those original recordings, as well as new compositions and arrangements by Chris and Allison. "Exploring afresh the freewheeling, wonderfully melodic interpretations of standard material recorded 50 years ago by Gerry Mulligan and Paul Desmond on Blues in Time and Two of a Mind, this new band promises to evoke the spirit of these classic recordings while giving free reign to the personalities of the five musicians."