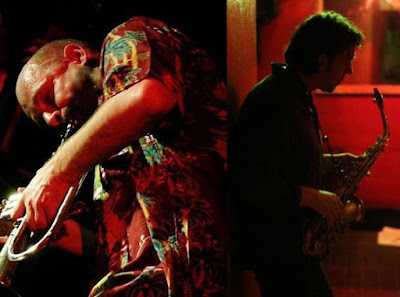 "The tall, shaven-headed Damon Brown is a well-known figure in Europe, his trumpet and long-gauge flugelhorn a well-known and welcome sound in Paris, Barcelona and other jazz-friendly cities for years. Only back home in London is he taken for granted, a curious and regrettable state of affairs. On a good night he is one of the world's finest players, and last night was such a one. Fluent, impassioned and technically superb - unlike most of his rivals.. Damon never splits a note - he produced a series of swinging and shapely solos that had the crowded venue in the palm of his hand." - Jack Massarik, London Evening Standard. "Christian Brewer’s alto sound is light - though he can dig in when needed - and he is a remarkably fluent and craftsmanlike improviser. Though fresh ideas flow inexorably, Brewer is not tempted to waste notes despite his fluency, so that there’s a real sense of purpose about his work." - Peter Martin, Jazz UK