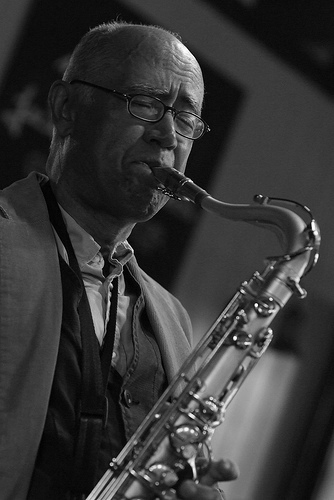 Art Themen, orthopaedic surgeon (now retired) and illustrious saxman, remains a firm favourite on the British jazz scene with a pedigree as long as Southend Pier. Art was involved in the early British blues movement with Alexis Korner’s All Stars, Jack Bruce’s Band and Long John Baldry’s Hoochie Coochie Men. He has played and recorded with the bands of Michael Garrick, Graham Collier, Don Weller and in 1974 began a long association with Stan Tracey. He also toured and recorded with Charlie Parker alumni, Red Rodney and Al Haig. “Originally a Dexter Gordon and Sonny Rollins disciple..Themen has proved himself remarkably attentive to the saxophone styles of subsequent generations. The atonal whirlings of Evan Parker are evident, alongside John Coltrane's sheets of sound, and the full-bodied, vibrato-laden rhapsodising of long-gone swing stars such as Coleman Hawkins” - John Fordham, The Guardian.