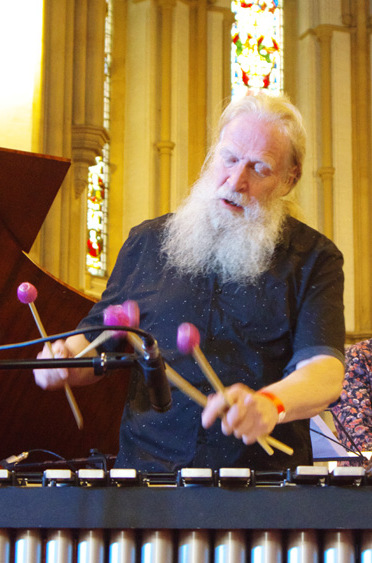 "I bought my first vibraphone at the age of 24 (after a wasted youth being a very bad - not to mention unemployed - rock drummer) and played my first gig at the age of 28. I am completely self taught."
"Barba Lunga represents the twentieth album of Beaujolais’ solo career and finds him in a pared down trio format.. Since I last saw him perform Beaujolais has sprouted an impressive grey beard that makes him look a little like Robert Wyatt. I’d have thought it would get in the way when he is soloing on the vibes but nevertheless the new album is named for it - 'Barba Lunga', meaning 'Long Beard'. As on 'Mind The Gap' and 'Sunset' the focus is again very much on Beaujolais’ original writing. The album’s two covers are a remarkable arrangement of the Jimi Hendrix classic 'The Wind Cries Mary' and an adaptation of the Stan Freeman/Jack Lawrence tune 'Faith'. ..The trio makes for a cohesive, well balanced and interactive unit that delivers some well integrated ensemble playing alongside the brilliance of the individual solos" - Ian Mann, www.thejazzmann.com
"..in full flight with two mallets in each hand, he gives the world's best vibes players a run for their money" - James Griffiths, Guardian